The Hippodrome Theatre, Seaside Road, opened in 1883 as the New Theatre Royal and Opera House, having been granted a Royal Patent by the Prince of Wales.

Mr. C.J. Phipps, a London architect who designed a number of theatres, was asked to draw plans and help raise finance for the scheme. The interior of the new theatre was partly modelled on his, now famous, Savoy Theatre in London. Before the end of the century, most of the famous theatrical personalities of the time had appeared at the theatre, including Ellen Terry and Richard D’Oyly Carte’s Savoy Opera Company.

In 1904 the theatre was renamed the Eastbourne Hippodrome and began a period of twice nightly variety shows. Among those performing before WW1 were Ada Reeve, Harry Houdini (who made a well publicised escape from Eastbourne police cells), Harry Tate, Marie Lloyd, Hetty King, Robb Wilton and Fred Karno’s Famous Troupe. Between the wars the theatre adapted and put on a number of different entertainments, including plays and films. And such stars as Vic Oliver, Cyril Fletcher, and Elsie and Doris Waters, then billed as ‘Stars of Radio’, appeared.

In the late 50s and early 60s, the theatre was bought by Eastbourne Borough Council and still the variety stars kept coming, including Tommy Trinder, Vera Lynn, Peter Sellers, Harry Secombe, Ken Dodd, Roy Hudd, and Bruce Forsyth, who was appearing at the Royal Hippodrome when he was called up to compere Sunday Night at the London Palladium.

The Royal Hippodrome has seen many changes over recent years and in 2019 we find the building finally being upgraded, refurbished and improved. After 5 years under the management of a local CIC the theatre is now receiving a £500,000 facelift thanks to new Directors, Alex and Debbie Adams. Improvements to the technical specification of the building, the internal spaces and of course the massive building project to expand the Foyer, are well under way. We have many more plans to improve and enhance the theatrical experience for all theatre goers and look forward to an exciting and fulfilling future. 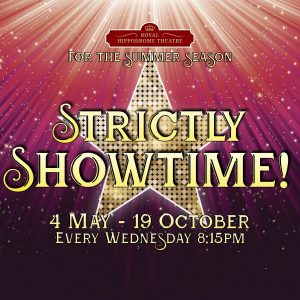